It is that time of the year when the big fours kick off at an otherwise dreary, empty loft on 550 Washington Street that transforms into frantic green rooms known for last-minute meltdowns, glitzy red carpets, coveted front rows and bustling runways that could give Manhattan’s streets a run for its traffic. A full week of creators, influencers, and artists that influences the billion-dollar fashion on the street next season. If you do survive the day with ample of hydration and antioxidant-rich food, there is enough reason to live it up at night. What is a glamorous fashion week without a night out? There couldn’t have been a better location for New York Fashion Week than in the neighborhood of SoHo which is historically an art district of Manhattan known for its boutiques, luxury designer outlets, galleries and design hotels. But then SoHo is closer to the bar scene of New York City as well and nothing says ‘IT’ lifestyle than an all-nighter at a speakeasy and then show your presence at the event next day 10am. If you are lucky to have chosen one of these chic boutique hotels for New York Fashion Week you will be near every watering hole to be seen.

Until someone topples it over at this year’s World’s 50 Best Bars, Dead Rabbit remains at the apex of the nightlife pyramid. Located in the financial district, it takes an obsessive love for perfection, exhaustive historically accurate menu (72 cocktails and growing by the year) and legendary levels of perseverance to hit the top spot in the world’s best bars. Dead Rabbit has its roots in the Irish-American heritage with two Irishman Sean Muldoon and Jack McGarry at the helm, who insist on being either No.1 or not at all. The historic and heritage references of the bar date back to the 1800s New York City with its streets infested with mob fights and ruthless entrepreneurs amassing obscene amounts of wealth. The bar has three levels of spaces suitable to your liking – The Taproom ( if you don’t mind your Chloe block heels marking over sawdust strewed floor), The Parlor is most suitable for the dandy du jour for an after party post the fashion event and then if exclusif is your only mantra ‘The Occassional’ is where you need to say cheers. For more details please visit Dead Rabbit

Closest to the NYFW venue is another among world’s top bars – Employees Only. Infused in the Art Deco and Prohibition era of New York, Employees Only is adamant not to fix what’s not broken like it’s place in the bar scene. It is the quintessential speakeasy of New York with wood-panelled decor from the 20s and 30s of the past century. It has a chic vibe with its decor, patrons and bartenders. The menu undoubtedly has been pivotal and influential in etching its place in the World’s 50 Best Bars time and again. From the classics like Manhattan to originals such as Provencal, Billionaire, Ready Fire Aim, it takes more than just a good menu to get straight A’s for eight years on the world’s volatile bar scene.For more details please visit  employeesonlynyc.com/menus/cocktails

Standing this year on number 8 spot on World’s 50 Best Bars, the all wood, bottle-green leather dimly lit bar at The NoMad Hotel in Manhattan reminds us of the resplendence and debauchery of 20s when bars and speakeasy were at their peak in New York. Located on the 28th and Broadway, it’s name is inspired by the cocktail rich historic neighbourhood of North of Madison Square Park where legendary classics were created. An understated entrance through the hotel lobby that’s almost hidden like a speakeasy does add to the experience of stepping into a time portal that whisks you into the prohibition era. Being a steady contender in the top 10 bars list you’d not imagine anything paltry as far as the cocktail menu is concerned. From Montauk to Zombie or Adonis the range is sufficient to soothe the nerves and drown the stress.

This decade-old cocktail institution rose to the heights of being the best cocktail bar in America and one of the top bars in the world in the shortest time. Today they have a book of cocktails thanks to the bartenders which includes hundreds of recipes from the contemporary cocktails to the classics. The menu is a slice of the book which ranges from classics to innovative cocktail recipes. For more details please visitdeathandcompany.com/menus/ 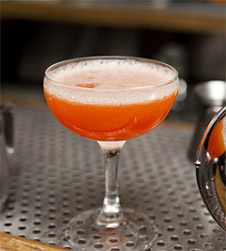 Being a fashion week attendee you are too keen to be seen at watering holes that are leading the curve in nightlife than lagging. Attaboy seems to be right up your alley if inventive drinks, bespoke experience and top of the charts is what you associate your bar scene to be. What began as a small Lower East side bar has mushroomed across the Pacific as well. Its speakeasy trend and secretive existence are all the brilliance of Sasha Petraske. Don’t be surprised if you aren’t given a menu because there is none. Walk up to the bartenders and ask for the drink you crave in that moment and they will conjure it for you. For more details please visit  attaboycafe.us/