Some destinations just take you by surprise and Windsor is one of those rare kinds where I ventured expecting nothing but regalia of the British royal family. As it turns out a day in this quaint town less than an hour outside London would be one of my happy places. The meandering Thames, yards of green spaces, fairytale-like streets under a mighty castle – Windsor has all the trappings of a daytime retreat without the monarchy’s shadow.

But let’s be honest we wouldn’t think of Windsor if it hadn’t been for the domineering castle – the official residence of Queen Elizabeth II and every monarch before her going back to Henry I. Today all eyes, ears and live streaming lenses are focused on Windsor Castle thanks to the much awaited and eagerly cheered royal wedding of probably the more popular of Princess Diana’s sons – Prince Harry and his fiance actress Meghan Markle. Of course, Prince Henry of Wales and the Princess Eugenie of York are getting married at Windsor half a year apart which makes it a double bonanza for the town in Berkshire county what with the flood of travelers and visitors this year. Among millennials, Windsor will now enjoy the badge of being a royal wedding destination from this year forward. I disagree with every tour operator or travel company that suggests Windsor is just a day trip from London. I was recommended that as well before my visit but I had read, seen and heard too much about the region to just take a day trip. I highly recommend you stay in Windsor or a town nearby like Egham or Ascot. 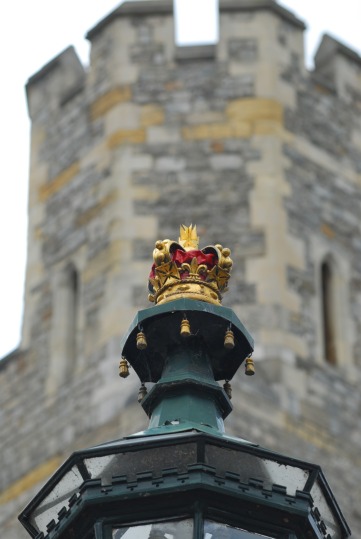 Windsor had its indelible place carved out in history ever since the Norman conquest of 1066 when William The Conqueror built a castle as a stop along the way to the next destination he conquered. Long story short by 1121 the castle had become the residence of English monarchs and has never looked back since. The town of Windsor raison d’etre had become the English monarchy and everything else had been regarded secondary. It was almost as if a castle had engulfed the entire county of Berkshire. Even today it is commercially reliant on the royal regalia and curiosity about the royal family. If not for the royal wedding of Harry and Meghan would the millennial/ FOMO generation keep visiting Windsor? We shall eventually discover. I surely want Windsor to be seen more than a royal destination. It’s not my happy place for being royal! 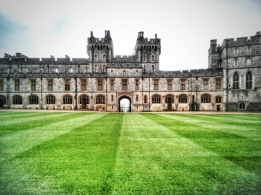 It is the largest, oldest and the most populated castle in all of Europe. Windsor Castle is the focal point of the British history and by history, I mean the royal family’s formation, its days of glory to its dwindling influence and now its beacon of hope. It was built like any other castle along the Norman conquest route from Alnwick moving south but Windsor had a good vantage point sitting atop a chalk hill and was higher than London. The strategic location of the castle helped watch the enemy marching towards the castle from miles away and stopping them before they reached London. It had a huge wide moat around it and was initially built with wood. King Henry II in the 12th century transformed the castle into a stone structure and fortified it even further with elaborate renovations. With every one of the 39 monarchs that resided in the castle, it adorned the personality and splendor of the monarch’s taste. Over the centuries it has gone from being an imperious fortress to a resplendent palace. The castle has essayed many roles in the medieval and modern history including the signing of Magna Carta – its been 800 years since democracy was formed in 1215, read all about Magna Carta in the previous post. 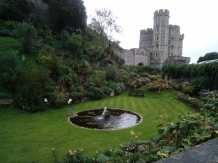 But it’s fame was at its luminous best during the reign of Queen Victoria and the stately banquets it hosted were the talk of Europe. The dining and stay tradition hosted by Queen Victoria opened doors of the castle’s State Apartments to the public. This tradition is carried forward by the reigning queen and has seen state banquets for President Obama among many heads of state. The castle is open to all even though your updated resume doesn’t mention Head of State as your current designation. I would sincerely recommend those of you reading this post ( and are art lovers as well as infomaniacs) to keep your eyes open while visiting the State Apartments. The walls bedecked by rare paintings from Charles I by Van Dyk and Rembrandt are absolute gold in plain sight. The castle is home to many spoils of the war from the battle of Mysore with Tipu Sultan of India to Waterloo with Napoleon Bonaparte Emperor of France. From war uniform and armaments of each battle to the royal gifts received by previous monarchs or British acquisitions during the spread of its empire are on display in the State Apartments of Upper Ward. These rare artworks and artifacts were in peril when the castle caught fire in 1992 and it took years of renovation and restoration to bring the castle’s glory back to life. One of the cutest work of decor to view in the castle is Queen Mary’s Dollhouse which was built in the 1920s for the wife of King George V and grandmother to the reigning monarch. 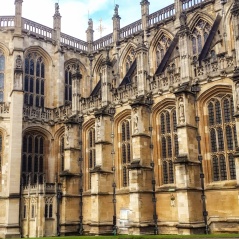 Walk down the slope from the Upper Ward to the place you want to visit if you are a true Prince Harry – Meghan Markle fan – St George’s Chapel. To those of you who are suddenly thrown into the fandom of British royalty thanks to Meghan Markle’s fiance, St George’s Chapel apart from being a spectacular Gothic structure has been where Prince Harry was baptized and has seen royal weddings including his uncle and his cousin. There hasn’t been a royal wedding for a decade. During my visit, I couldn’t stop marveling at the exterior detailing of the architecture from the 14th century and was astounded by the number of stain glass windows enclosing the chapel. Once inside the chapel is consumed with light coming through the stain glass windows making it spellbinding an experience. The incredible pieces of sculpture are perched on top of the chapel’s exterior walls and are 76 animals called Queen’s beasts guarding the chapel and each one denoting a trait. Some of these animals are the lion of England, red dragon of Wales, griffin, swan, and bull. When in England crane your neck for as long as possible because the marvels of design are right above your head. The chapel seats 800 in service and it will be here where the royal ceremony will begin on 19 May 2018. 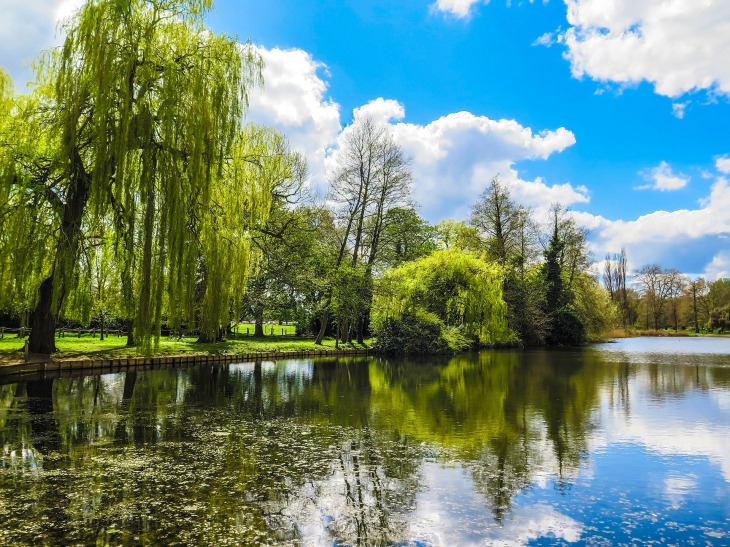 The leisurely pace of Thames along Windsor and its neighboring towns with trees on its fringes is the definition of a picture postcard. Thames is the reason I fell in love with the town in the first place and the thought of being on the banks or a boat escaping the noise of cities gets me motivated and recharged every time I retreat into my happy place. Romance is beckoning when you are walking or biking along the Thames, its embedded in its unhurried state immersed in the bath of the English summer sun. I ask of you to just read a book or engage in a chat with your bestie by the river. It’s the perfect girlfriend getaway you can ask for. Boat rides are available from Windsor to Runnymede and Maidenhead. There are quite a few retreats you could stay while visiting my personal favorite being The Oakley Court, Runnymede on Thames Hotel and Spa.

One of the assets of Berkshire is the excess of green areas and pedestrian-friendly streets it holds. If you are a park person The Windsor Great Park, Savill Garden and Frogmore House and Garden would not disappoint you. I recommend going for long walks in these parks along the many walks such as Long Walk that leads up to the castle, Queen Victoria Walk, Queen Elizabeth walk but if you want lush green on one side and river on other venture out to Prince Albert walk as it runs along the river.

Eton is a must visit if you wish to connect the Prince with his roots in Windsor. Like his brother Prince William, Duke of Cambridge, Harry went to Eton College for his education. Eton College is in the backyard of Windsor Castle across the river and it has been a tradition for the royal family to join Eton for a formal college education. Not too far from Eton is the Royal Mews and Windsor Royal Racecourse. The royal family has always been engaged in equestrian sport including Prince Harry who enjoys playing polo like the rest of his family members. Royal Windsor Racecourse is located by the River Thames just a stone’s throw from Windsor Castle.

Afternoon Tea at The Tower Brasserie 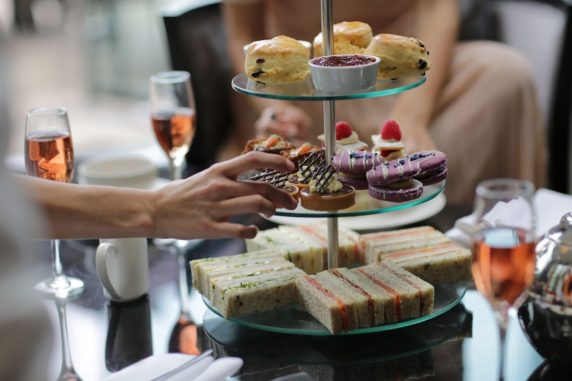 How could you visit Windsor and not engage in a quintessentially English tradition of Afternoon Tea? That would be like visiting Turkey and not eating Baklava or New York and not having a hot dog or pizza. I have shared a simplified post on English Afternoon Tea a couple of years ago and if you are visiting Windsor here are some of my recommendations to enjoy afternoon tea. The Tower Brasserie right opposite the castle, The Oakley Court Windsor, Runnymede on Thames Hotel & Spa Egham, Number 16, South Kensington London, Baglioni Hotel London.

Celebrate With A Pint 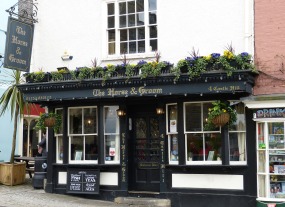 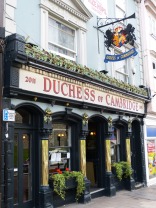 The Duchess of Cambridge Pub opposite Windsor Castle

A visit to an English pub is the right way to begin the evening and end the day or your sojourn in Windsor. You may have seen pubs strewn across New York, Boston or Toronto, you may have bought into the idea that they are all the same either side of the Atlantic, but trust me they have nothing on the actual English pub experience. To initiate you into the pub menu try to compare portion sizes, I have come to experience that when it comes to generosity on the plate Britannia rules the plate. English pubs are quaint and gregarious in their atmosphere. Shepherd’s Pie, Fish & Chips are a staple but do try the Atlantic Cod or other favorites of the locals. Some of the pubs you could visit are immediately on the doorsteps of Windsor Castle like The Horse & Groom Pub, The Duchess of Cambridge and down Park Street is Two Brewers and The Corner Ale & Cider House Pub.

Read more articles related to the Royal Family on the blog.