About four years ago I glanced at a picture of a beautiful floral design at Four Seasons Hotel George V Paris. It wasn’t the usual floral decoration at a luxury hotel but there was something particularly unusual about the designer. He was nothing like the typical hotel florist, he was nothing short of an artist from a high-end atelier commissioned for this piece of art. And a piece of art it was; with flowers as his material and the lobby as his canvas, Jeff Leatham’s journey was fascinating me with every word I read about him.

America knows him as the ‘Rockstar Florist‘ or the one who captured Oprah Winfrey’s attention with his designs or who designed  Sofia Vergara’s wedding. But the hotel and floral industry know him as the disruptive force who changed the landscape and broadened the horizon of floral art. What began as an unchartered journey at Four Seasons Hotel at Beverly Hills in 1994, catapulted to a trajectory into celebrity when the doors of Four Seasons Hotel George V Paris opened back in ‘99. In the shortest time, Jeff Leatham went from being a model to Artistic Director at Four Seasons to a celebrity floral designer to  Sir Jeff Leatham. For his contribution towards art, the French Ministry of Culture decorated him with Chevalier of the Order of Arts and Letters – the highest honour in France similar to knighthood in 2014. Today he has his studio at Four Seasons at Beverly Hills while continuing to work in Paris. With a reality TV show, a range of crystal vases – Fleurology exclusively for Waterford Crystal, creating home scents this rockstar has broken every barrier with a delicate flower.

I have been an admirer of his art ever since and ardently await his Christmas decor at George V. He has torn up the Christmas decoration blueprint and dramatically redesigned it . As a lover of creative pursuits what draws me to his work is how he unabashedly disregards the rule book and follows his instincts. I have been wanting to interview him for a year to showcase his holiday designs. This year, I was fortunate to have a conversation with him not just about the holiday designs but also his thoughts on disruption in design and the road ahead. During my conversation, I discovered a true artist who makes humility and kindness the new sexy.

Before you, nobody could relate flowers with rock n roll. How did you get that perception changed?
I think that people call me rock star florists or the rock n roll guy is because the way we do things and the way we don’t really care what people think so to speak in that way we are designing for ourselves. In a way doing things that are hopefully out of the box. So in that sense, the title that was given to me was a way for people to think of the designs being out of the box and doing different things.

Today we hear the word ‘disruptive’ thrown around so frequently. As the original disruptor in the floral industry, how do you perceive it?
There are so many people in the industry from when I started as compared to now where there are different generations like you have the classics as well as the new kids. There is a reason why we became who we are because we do what we do. The huge part of my success was definitely because I was at the Four Seasons George V and they gave me the freedom to do whatever I wanted to do, which we still have and it is fantastic. But it’s funny sometimes to see designs and people talk about it as innovative but then I say that well I did that in 2001. There are new designers who are not as humble as they should be but I have moved on to a place where it’s all about collaboration. It’s about working with other people, it’s about creating amazing experiences with other artists rather than blowing up my own ego.

In your opinion what is the new trend in floral design?
Well, nowadays we are in a situation in 2017 where almost everything has been done before and a lot of those things have been done before by me. But we’re still trying to be innovative and doing different things other than flowers. I think that’s important for the business and your career to branch off to other things. That’s why I do other things like silk rugs, vases, home scents, because there is something else to do apart from just flowers. It’s also good to work with your team and discuss with them how they see designs and what would they want to do it differently so it needs to collaborative. That’s what I do in Paris, I work with different artists, sculptors and see what their designs can bring to mine and make it even better. That’s the most important thing for me.

You changed the very concept of holiday decoration at Four Seasons George V. What inspired that idea?
I have always been a huge art lover and it’s always been important to me. I think at some point it’s important to take a breath and during the holidays I take a breather from flowers and don’t use them as much. It gives me a chance to do different things and I get 2 months break from flowers. So it gives me time to think about what can I do that’s innovative and cool. 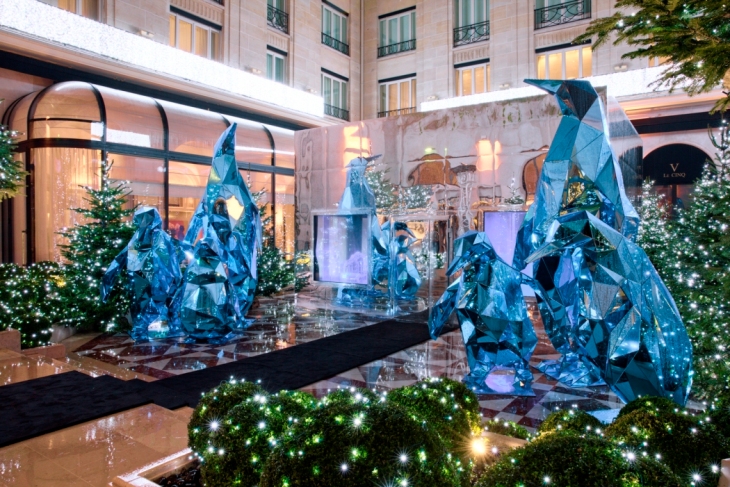 We have seen you go from golden reindeer in 2013 to red bears and blue penguins. What are we expecting this year?
Well, the penguins and bears are back like an animal kingdom but this year we designed an ice bar in Paris at the hotel, so it’s like an ice lounge where you walk in and everything is made of ice – the walls, the chandeliers, the furniture. We partnered with a great clothing company to create outfits for people to go inside. So it’s more of an ambiance made of ice and there I have the Penguins and the Bears around the ice giving it a real experience. Like an Arctic lounge in Paris to go inside and get drunk. It’s a real experience when you walk in and then dress you in these outfits for you to stay warm and then you go inside. There’s music that I have chosen for you to live in this world where there are couple of my reindeers with icicles hanging from their antlers.

Flowers are important in most cultures. Have you worked on a cultural theme for a festival, wedding or an event?
Yes for sure I have probably worked everywhere in the world except India. But I have worked in other countries and I always try to take their cultural aspect too like when I work in Russia, China, Japan, Thailand. It’s important to take from their culture and the cultural respect in mind like when I am working with flowers that are only available there. But it’s important that when you are working there you are showing them something different.

Do flowers continue to fascinate and inspire you after 21 years?
Of course! I wouldn’t do what I do every day if I wasn’t inspired by flowers.

You have expanded your brand from a Rockstar Florist to designing crystal vases to your own reality TV show. What’s next? A floral museum or a garden by your name?
At the Four Seasons George V in Paris I have my own gym now – the Jeff Leatham Spa and that’s been fun to create. One day I’d love to have a garden but you know as much as I love gardens and that whole aspect, I am a floral installation artist but it’s not my goal to have Jeff Leatham garden cause I am really not good at gardening as I am sensitive to plants if they die quickly. Well about the museum, we’ll see as my house is a museum since I am an art collector.

You can visit Jeff Leatham’s website for more of his creations.